A Journey through Dementia Care – One Family’s Story 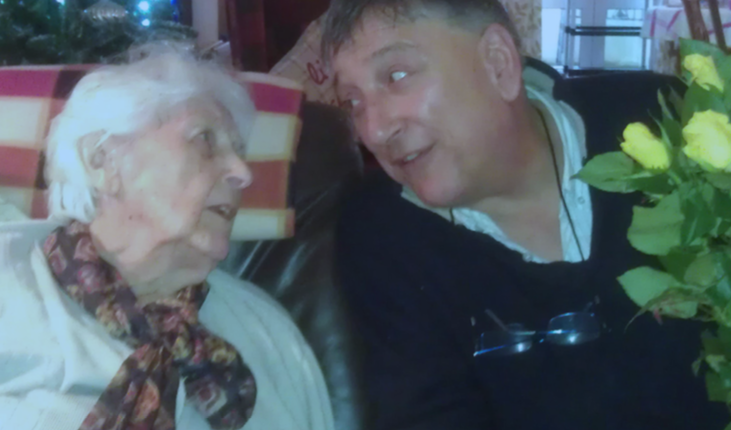 21 Dec A Journey through Dementia Care – One Family’s Story

Posted at 11:39h in Dementia by niall@intrade.ie

Martin Caspary, whose late mother Anna Louise was a resident in Moorehall Lodge Ardee, has been a part of the transformative journey taken by Moorehall Living in the area of dementia care.

Anna Louise first joined the Moorehall Living community as a resident in Ardee in 2004, and Martin and his wife Ann have played a full part in life at Moorehall Lodge Ardee ever since.

“Once we realised that my mother was in the early stages of dementia in 2001, we invited her to move from home in London and come and live with us in Ireland,” said Martin.

“For the first six months, we had a carer in our house for four hours a day, but we knew that we had to see beyond that, and, on medical advice, began to check out nursing homes in the region.

“We visited 12 nursing homes in all, from north Dublin to Cavan. We didn’t know what we were looking for, but we would go and see these places and imagine if my mother would be happy there.

“I have to say that most of them pale into insignifcance and I was deeply unimpressed by one.

“As part of this process I went to Moorehall Lodge Ardee and met Michael McCoy, and he talked about a care facility for people who need a special type of care.

“Even then I knew that Moorehall Lodge Ardee was different – although it has changed an awful lot since then.

“In those days, they had a long corridor with a dark oak door at the end of it – a far cry from how people are introduced to the nursing home today.

“I remember the big room and thinking to myself, isn’t that nice, there is a nice big well-lit room. If mother was there we could come in and sit down and look out on the garden.

“However, at that time, people weren’t in the big room as much and tended to be in their rooms – a far cry from life in household model of care.

“The bottom line is that I remember walking away thinking that Moorehall Lodge is different to what we have seen so far and that I got a really nice feeling from talking to Michael.

“In February 2004, my wife Ann had got word that there was a room available in Moorehall Lodge Ardee and that we had to act fast.

“To be honest, I couldn’t even face the notion of taking my mother in. I didn’t go and see her until a day or so afterwards.

“I have to say I was pleasantly surprised and saw a different environment to the one I had seen with Michael the year previously.

“The first thing that struck me was there was a coffee dock and the fact that I could make my mother a coffee and we could have a chat very quickly changed my perspective.

“There were two other ladies who went in about the same time and they bonded very quickly – one was a German lady and the other was a woman called Margaret.

“My mother had worked in a kindergarten in Belgium before the war and knew some German.

“They all enjoyed art and music, ate together, walked together – in fact, they did everything together.

“In those days, there wasn’t as much to do in Suaimhneas in comparison to today’s incarnation.

“But there was certainly stuff going on in the background. A consultant arrived and talked to all the families about what they would like to see – I would say we did five interviews over a couple of months.

“Meetings were called where there was talk about a household model and looking for a better way to provide inclusive care for everyone.

“The detail went a bit over my head but the message was clear that these people wanted to do something that would give all of us a brighter future.

“My focus was on Suaimhneas but I wasn’t aware that the household concept was unfolding elsewhere in the facility.

“A lot of building work went on and then things started to happen in the big room. For a start, activities came to the household rather than having residents travelling to them.

“Food was brought from the main kitchen to be prepared and enjoyed in the Suaimhneas kitchen, rather than residents travelling to a big dining room where you were served and would leave.

“Once the household concept was introduced, you instantly felt like you were at home.

“I was far more comfortable and at ease and could pull up a chair or sit in an armchair if I wanted to.

“There was great interaction with the staff who were suddenly all working in situ in the households.

“Once the household model was in place, the concept of the Butterfly approach to dementia care was introduced.

“As a group of families, we met dementia care specialist David Sheard and listened to his experiences and stories.

“For example, he told of one resident always used to get so aggressive about 4pm every day that he had been asked to leave three nursing homes.

“No-one knew why, but when someone took an interest in his history, it turned out that he had been a farmer and at 4pm every day he would collect the eggs.

“Mr Sheard’s colleagues then left eggs for him to find in the garden at the same time every day, and the frustration ended there and then.

“For me, that was the door opener to the realisation that there has to be a greater connection between the carer and the person’s history.

“I did a short presentation on my mother’s life and staff members used the highlights as touch points to enable better engagement with Anna Louise.

“We personalised her room with an old Sony radio, her music cassettes and a Parker Knoll chair.

“It dawned on me that I had my mother’s sewing machine and knew that it was never going to get used again.

“The next morning it went into the boot of the car and down to Moorehall Lodge where it soon became a communal piece for everyone in Suaimhneas.

“That was the absolute turning point for me. The day I knew that we were part of a loving community.

“Over time, I felt that my mother became much happier and there were certainly more positive comments on the back end of her journey.

“I started to hear less of ‘what am I doing here’ and more of ‘they are very nice here’ or ‘the place is very clean’.

“The household really came alive with the Butterfly approach and the staff came up with great ideas to make lives more interesting.

“They brought in a quiet area which was ideal for my mother and was a great positive in her life.

“I thought that her love of art appreciation would carry through to the art classes but when I stopped and thought about it I knew that her interest had waned and she was quite happy to sit in the armchair next to everyone.

“In the latter part of her journey, my mother eventually lost a lot of her capabilities and ceased to recognise us.

“It was a long road which took us to the edge on more than one occasion – we really started saying goodbye in 2013.

“I am convinced that if she hadn’t been in Moorehall Lodge Ardee with the care and attention that she was given she would not have lived a fraction of the last four years of her life.

“At the end, we were treated so well. The respect, the love, the care from start to finish was beautiful.

“My mother passed away on December 12, 2016 –we were invited to the staff Christmas mass where they all said their individual goodbyes to my mother as she reposed in the oratory.

“I really didn’t want to leave the other residents that we had got to know over the years, so Ann and I continue with our regular Saturday afternoon routine with one or other of us going up to Moorehall Lodge Ardee

“It is easier for us that we are only up the road. Moorehall Lodge is as much a part of our life in Ardee as the main street or the shops.

“In a small way, our journey continues.”